<Back to Historical Fortifications in Bukovec

Fortifications (locally called as Sance) are hiding while offering many - remarkable beauty of the surrounding landscape, a piece of life and the fate of local highlanders, insight and much-needed perspective on all the happenings around.

Fortifications are for us a place where we can achieve the necessary silence, to remember our ancestors, and according to the tradition of the fathers, devote a minute of silence for meditation and prayer. Much of real possibilities exist, it depends on each of us how much we use the free time.

Fortifications are inherently bounded with the fate and history of Teschen Silesia as a whole, especially with the construction of fortifications at southeastern border and security of significant Jablunkov Pass, through it an important land route passed since ancient times, which eventually turned into an important communication between Upper Silesia and Hungary. Only in this context, we can comprehensively look at the history apparent earth embankments on nearby hill Kympa and local redoubt - the so-called redoubts whose remains are preserved in Bukovec in relatively good condition.

Location "Sance" in Bukovec is actually visible a rest of redoubt - a small field of fortifications square nature, which consists of the natural mound, excavated ditch and now no existing palisade, which was fortifying element, composed of a set of closely consecutive wooden stakes. In all four corners of the redoubts are noticeable ramps that served to facilitate access defenders on the platform and for better deployment of heavy fire tools.

You might wonder whether the fortifications were occupied by a crew or by the before mentioned local recruitments. The exact answer is unknown, but since the redoubt head a guard and protective function, it can be assumed that at the time of threat, it was temporarily occupied and guarded. 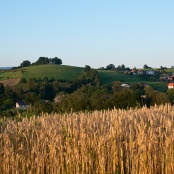 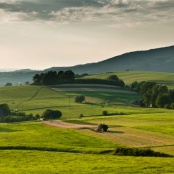 <Back to Historical Fortifications in Bukovec upward